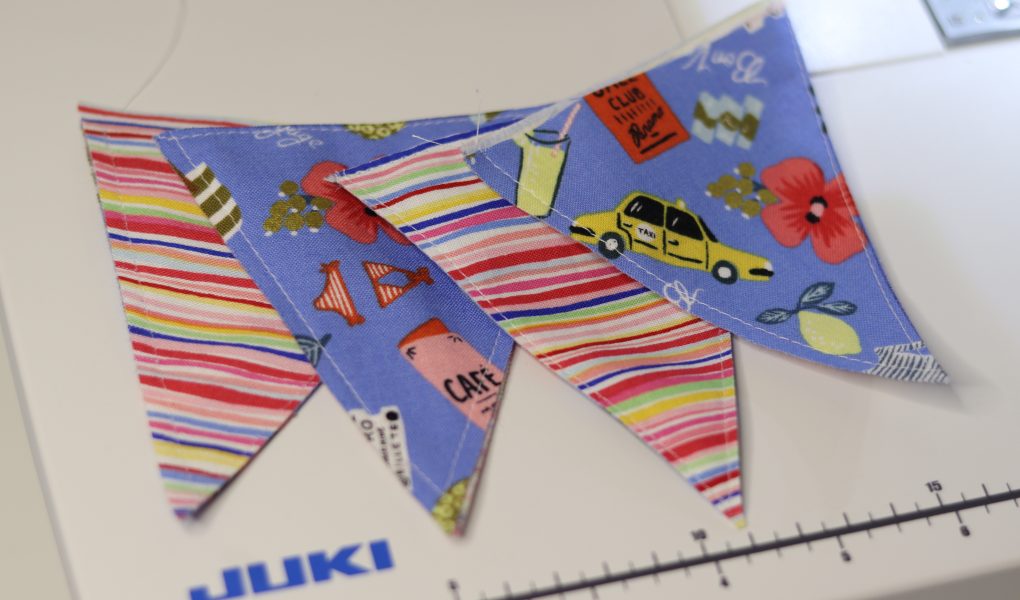 Here’s a tutorial for some fast and fun Baby Bunting. I love decorating with bunting and I’m always looking for new ways to make it. I needed to make some tiny bunting flags to go in a camper van that I was kitting out for our neighbours. But tiny pieces can be fussy to work with!

The genius of the idea, was to do all the stitching on the large bunting flag so that I wasn’t working with tiny pieces. I’ll come back to this later.

There was no math in this. I just played with triangle shapes on scrap paper until I found one that I liked. The large bunting flag needed to be big enough so that the smaller triangles were a good size to work with.

First, I chose my fabrics. I’m a big Rifle Paper Company fabric fan. So it was fun to choose lots of my favourites for this project. Then I backed the bunting flags with (Vilene) Vlieseline H180 iron on interfacing. I use this for all my raw edge applique projects so I invested in a roll. Now I have the Vilene interfacing to hand whenever I need it.

The vilene adds structure to the bunting flags and helps to keep the edges from fraying. The vilene also gives me a good clean cutting edge.

Because of this I trace the template shape directly on the smooth side of the Vilene and cut the Vilene bunting flags a few centimetres OUTSIDE the drawn line.

Then I iron the Vilene flags, bumpy side down, on the wrong side of my chosen fabrics. I put a piece of scrap fabric between the iron and the Vilene as an extra precaution to keep from melting or scorching the Vilene.

My plan was to make my bunting flags double sided. Just for fun, I chose different fabrics for each side. Placing wrong sides together, I stitched about a quarter of an inch all the way around the flag.

Then I used my ruler and pen to trace that triangle shape. These drawn lines would be my cutting lines.

Then I took the large bunting flag with the traced lines to my sewing machine. I stitched a tiny bit outside of each drawn line, on both sides.

Now I cut carefully along the drawn lines, giving me 4 tiny bunting flags already stitched together.

And here they are – four pre-stitched double-sided baby bunting flags.

I repeated the process with each of my larger flags until I had a stack of 28 pre-stitched double-sided baby bunting flags.

Now I took all my baby bunting flags to my Juki MO-2000 overlocker. I set the overlocker to the rolled hem stitch.

Leaving a long tail to start, I stitched the tiny bunting flags together.

This is such a fun fast method, especially for these baby bunting flags. The rolled hem stitch is just a perfect way to connect all these little flags. The long tail at the start and the finish is just what I need to tie the bunting in place.

Check out the baby bunting shadow! And don’t miss the stack of Rifle Paper Company Christmas fabrics. I’ve got plans to make some Christmas baby bunting. 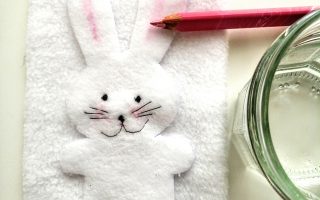 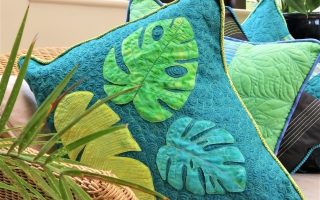 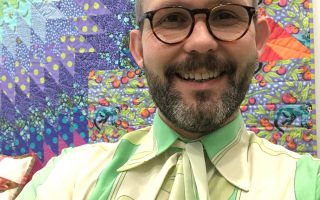 Mark Francis to the Rescue